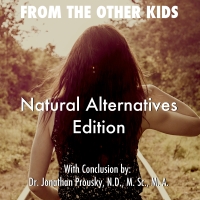 Different from the Other Kids

A Book of Interviews for Parents of Challenging Children

Different from the Other Kids : Natural Alternatives Edition sprang from Angela’s best friend Christine witness her father’s journey from near-death to living and enjoying life again! Walter, Christine’s father, was diagnosed with cancer for a second time and turned to infusion therapy as a last-ditch effort… Walter managed to outlive his diagnosis from having just two months to live, to surviving to his next (almost two now) birthday with optimal health. This story is one that had shown Angela that the natural path is one worth considering. Listen on iTunes or GooglePlay!

Did anyone get a chance to listen to Grace Kohn‘s new interview with Different From The Other Kids‘ own Angela Tsounis? This week we wrap up this three-part interview, focusing on how she stays positive throughout her experiences, and what we all can take away from her story. Listen on iTunes or GooglePlay!

Grace Kohn joins Angela this week on Different from the Other Kids : Natural Alternatives Edition, who is a public speaker and author. Grace is the mother of Julianne, who has autism spectrum disorder. Grace talks about her past and how she has spent her life caring for Julianne. It’s an amazing tale of hope and courage, one that everyone should hear. Check it out and let us know what you think, click here to find a list of platforms you can listen to our weekly podcast on!

This week Angela welcomes back Rosa, who you might remember from last week! Angela and Rosa talk more about how important the mind-body-spirit connection is to overall health, and how it can help everyone live a more balanced and grounded life. Listen to this week’s episode for some great information and really sound advice about the importance of being mindful and grounded. Listen on iTunes or GooglePlay!